‘Step Eight: Did my beard just get thicker?’

Hello everyone. I am, of course, off my medication.

In our day-to-day lives, it can be easy to feel bloodless and divorced from nature, as if pushed from place to place by enormous metal gears like in a Charlie Chaplin moving picture. We can feel so out of control of our own selves sometimes, living in a world ruled by systems and laws established by people we’ve never met, that we need stories about heroes. Heroes like SahebaN speak to us because they take us out of the mundane, and into the realm where we feel alive.

Heroes exist simultaneously within and without societal systems, venturing off the paths that those great clockwork sprockets push us along from birth to death, demonstrating to us mortals that there do exist, as a matter of fact, options. Heroes like SahebaN show us that it’s possible to participate in a crooked game, but to do so honorably.

The role of the hero is often to slay dragons. This hero’s dragons however, are more relatable to most of us than a large animal with scales. This hero does battle not with big lizards, but with society’s expectations of us, and, for example in the excellently-titled chapter, ‘SahebaN VS the Idea of Permanent Job Security’, our expectations of society.

It is impossible, (or rather, far too taxing for a smooth-brained dilettante such as myself,) to pick a favourite line from the book. However, there is a part in ‘Vital Parts’, which to my mind takes place in the kind of primordial domain of dreams and myth that will allow for a child to have superhuman attributes such as being able to speak despite being a newborn infant, as well as the ability to question authority:
“Clip! He cut the only umbilical cord SahebaN had, taking with it most of her hopes of returning.”

As she tells Ego later, she is still connected to her mother by her umbilical cord, as the doctor could only cut the middle of the cord, not its beginning or end. It’s strange to think that it is literally true that everyone you’ve ever met has been nothing more than a growth or polyp that his or her mother had to have medically removed.

Author Fauzia Rafique has created a world with a Newtonian level of moving parts, sealed tight in a literary jar of her own making. The fictitious biographer character Ego Feathers, (Who perhaps represents the author’s Jungian “shadow self,”) serves to punch holes in playful constellations in the jar’s lid, letting in oxygen and, more importantly, the author’s divine light to shine on the faces of the characters she has so skillfully trapped in a universe with power structures as complicated and corrupt as our own, as well as a novel system of magic that comes across as internally consistent and logical as computer programming language.

Using such oddly familiar and consistent language lets the reader behind the curtain, allowing us a peek at the thought processes and the compromises between intent and reality of those Magic Civilians and Civil Magicians that are peppered throughout the novel.

As a balance to all that spice, the attic salt offered by the tension between Rafique’s straightforward narration and the shameless editorializing of the fictional biographer Ego Feathers, serves to add a full and robust flavor for the reader’s ingestion of the book’s stew of the vegetables of social commentary and hearty chunks of lean, seasoned feminist theory.

When the bowl slides in front of you, and you get a face full of that steam, you’re going to want to pull back from the heat. That’s okay. That’s a natural reaction. You’re only human, and this is hot soup. Take it one sip at a time at first if you need to, but by the end you’ll be drinking it back like clear mountain water.

It’s satisfying; it’s refreshing, it’s everything you wanted it to be. But even once you’ve bought it and read it and you think you’ve absorbed it, you’re going to want to dive back into that clear mountain water, because no matter how many times you return, it seems there are always more pearls of wisdom to be found.

I hope you’ll pardon me for Waxing Pataphorical On and Off like a conceptual Karate Kid.

I’m Liam Wallinger, artist and author of The Gravedigger’s Holiday and I flatter myself to say, friend of Fauzia Rafique.

“SahebaN is the feminist warrior I hadn’t realized I was missing.”

‘Being a Canadian woman writer of European descent, I came into Fauzia Rafique’s The Adventures of SahebaN without background knowledge of the role (Mirza) Sahiba plays in much of traditional Punjabi culture. The beauty of Rafique’s text however, is how my lack does not impact my understanding of how the narrative turns a cultural model for perfection (Sahiba) on her head to showcase the flaws of that very perfection, and (in particular) to show that a woman can be honourable, and pure, and loyal, without bowing to the restrictive ideas and expectations that society and religion place upon her.

‘Right away announcing her departure from the traditional “folk” Sahiba, Rafique creates her double in SahebaN, the Relentless Warrior. From the moment she is born, SahebaN questions those around her; but in a world where questions from a woman, and especially a brown one, are not taken seriously, she finds only silence. Readers soon recognize her universe as a barely veiled image of our own, led by none other than Civil Magicia, a “fantastical” governing head that perpetuates inequality, and which seems dedicated to controlling the natural chaos of humanity. Yet, as our uninhibited (and repeatedly misinformed) SahebaN rises and falls through CM’s imposed hierarchies, readers get the chance to rejoice through her struggle as she continually flouts the very authorities trying desperately to regulate her existence.

‘It is within this frame that I came to know SahebaN as the feminist warrior I hadn’t realized I was missing. She fights back against those who would dare oppress her by using her very femininity as her strength, at one point, literally pushing a bloodied menstrual pad into her potential rapist’s face! (Yes!)’

Continue Reading at Words of Hers:
wordsofhers.com/2019/02/26/drums-of-change-a-review-of-fauzia-rafiques-the-adventures-of-saheban

Jessica Barratt is an author and editor who founded Words of Hers, the home of JBEditing and The (Almost) Daily. Visit her ‘Loving Edits’ Facebook page at the link below.
facebook.com/LovingEdits
jessicabarratt@live.ca

Join us for an intimate and engaging evening as local author, Fauzia Rafique, reads from her latest novel ‘The Adventures of SahebaN: Biography of a Relentless Warrior’.

Monday, January 30th, 5-7PM
An evening with
Fauzia Rafique
Author of
The Adventures of SahebaN: Biography of a Relentless warrior
With
Host Ranbir Johal
And
Guest Speaker Heidi Greco
Lots of
Discussion/question time

This novel is a delightfully original, tongue-in-cheek look at the obstacles women face in life; a parody of the misogynistic, post-colonial world that we live in. 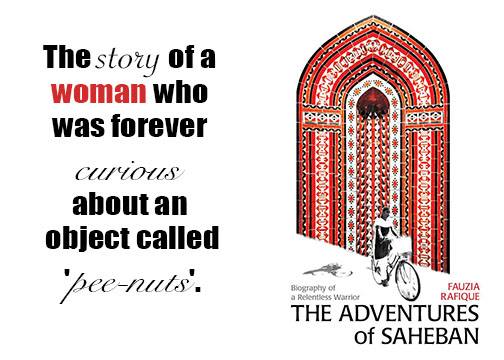 ‘Today is the day, Jattee,’ the Mistress said as she returned from the washroom to take back her Lazyboy.
From
Coming of the Clothes:
SahebaN & the Rites of Reproduction

The Adventures of SahebaN:
Biography of a Relentless Warrior
A novel by Fauzia Rafique
Mail out December 1st.
Libros Libertad 2016

“Funny, tongue-in-cheek, and deliciously serious. A novel that looks misogyny in the eye and says ‘No’. From birth, SahebaN refuses. She is uncompromising and she prevails, becoming a legend in her time. In Rafique’s telling she’s everywoman and Everywoman’s avatar.” 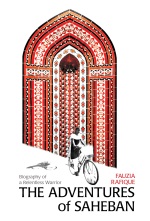